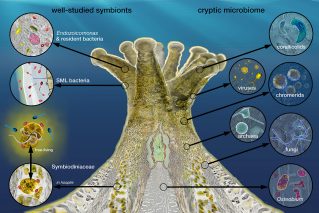 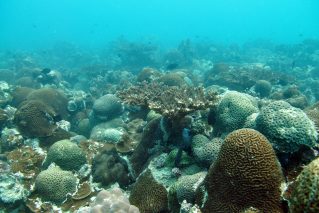 NYU Abu Dhabi is located on the coasts of the Arabian Gulf, one of the best-studied extreme reef habitats and a natural laboratory to investigate how corals may adapt to the high temperatures predicted under climate change.

Coral reefs, one of the world's most biodiverse and economically essential ecosystems, are under threat due to heatwaves associated with climate change. Our team works on developing a better understanding of how coral reefs may respond to future climate change and extreme environments.
The ability of the Gulf's corals to survive is due to several mechanisms, including genetic adaptation, transcriptional responses, and heritable epigenetic changes that enhance thermal tolerance in the coral host. In addition to these mechanisms, mounting evidence suggests that the coral microbiome plays a vital role in coral adaptation and response to thermal stress and that perturbations of this microbiome are associated with bleaching and disease.

In the Arabian Gulf, corals have a unique microbiome associated with a distinct chemical signature, which may contribute to their resilience. These corals are also associated with a region-specific, thermally tolerant symbiotic zooxanthella, Cladocopium thermophilum; despite the importance of the microbiome, the role-specific microbial members play and the mechanisms that enable them to contribute to coral survival are mostly unknown.

To identify the microbial players that contribute to coral resilience and determine their role in the enhanced thermal tolerance of Gulf corals, our team is conducting a combination of field- and laboratory-based studies.

This project aims to expand our knowledge of the microbial players and the molecular mechanisms that contribute to resilient corals, information that would be useful as monitoring and diagnostic tools for coral health in the southern Arabian Gulf, and governmental efforts to protect coral reefs.