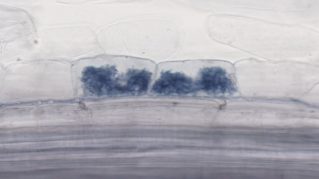 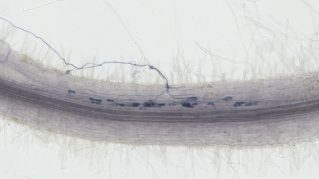 One approach to improving drought resistance is comparing similar species with divergent traits to identify genes that confer desirable traits. However, one major gap in drought research is the fine-scale response to limited water in crops, as tolerance traits are often mediated by specific cell types in roots that absorb water from the soil.

For example, one plant study showed that heat stress induces an unfolded protein response in one cell that signals to neighboring cells, highlighting the importance of localized “sensor” cells that trigger systemic stress responses.

Our working hypothesis is that comparing the root cells of closely related crop species with different drought responses will reveal genes that help specific cell types tolerate drought. We will use maize and sorghum as model systems to understand drought adaptation. These two species offer an ideal comparison because they are closely related – separated by only about 15 million years of evolution – yet sorghum is much more resistant to drought.

The Birnbaum lab has been a pioneer in the plant field in developing genome-wide methods to assay gene expression in highly specific cells. The lab’s techniques often rely on rapidly digesting the cell walls of plant organs and using fluorescent cell sorters to isolate specific types of cells69, or, more recently, high-throughput single-cell RNA-seq to assay entire organs68. Our techniques have been a workhorse in the field, but the cells in older tissues – where differentiated cells are fully functional – are also difficult to isolate by cell wall digestion70.

The Birnbaum’s lab at NYUAD has recently developed nuclear sampling techniques that require only the mechanical “chopping” of tissue to release nuclei, allowing for the sampling of virtually any cell in the plant. Preliminary work being prepared for publication shows that readouts from single-nucleus RNA-seq are highly similar to whole-cell RNA-s.