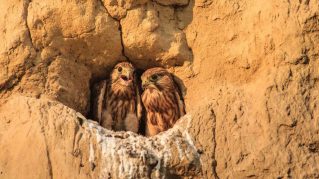 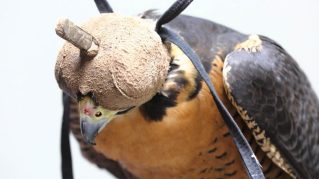 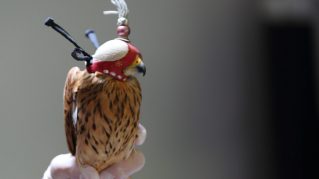 Falcons (genus Falco) have fascinated humankind as symbols of strength and speed since the beginnings of recorded history. This bond between humans and falcons is embodied in the ancient art of falconry, which is now recognized by UNESCO as an “intangible cultural heritage of humanity.” The symbolism of falcons and this heritage of falconry are an integral part of cultural and commercial life in the United Arab Emirates, where falconry remains a national sport of economic importance. Despite their importance and prestige, the large falcons that dominate falconry—peregrine falcons (Falco peregrinus) and hierofalcons (subgenus Hierofalco)—remain at the center of an evolutionary enigma: having only diverged and diversified within the last several hundred-thousand years, these birds are now represented by approximately two-dozen distinctly recognized phenotypic and ecologically adapted lineages that have emerged against a backdrop of incomplete lineage sorting, and gene flow in the absence of reproduction isolation. Humans have further contributed to this muddled evolutionary history through falcon husbandry practices, including intentional hybridization and the release or escape of captive-bred falcons, both as a by-product of falconry and as a conservation strategy in response to the decimation of some falcon populations by organochloride insecticides (particularly DDT). While these complexities have hindered studies into the evolution of falcons in the past, recent breakthroughs in nucleic acid sequencing technology now make falcons exceptional candidates for genomic studies. The CGSB Falcon Genomics Project aims to develop basic and applied falcon genomics research in collaboration with local and international partners working on falcons.