Recently, a group of 14 NYUAD students set off for the Abu Dhabi International Airport bound for a weekend in Kerala, India. The purpose of the trip? To meet and learn from NYUAD Associate Professor of Theater Rubén Polendo's friend and longtime associate Gurukkal. The outing was part of Polendo's Making Theater course, which encourages students to work together as a performance company and teaches the fundamentals of collaborative theater-making.

Despite learning about Kalaripayattu before their departure, nothing could have prepared the students for their first session in the ancient martial art under the tutelage of Gurukkal in his Kalari. One of the oldest martial arts in existence, Kalaripayattu is not only a form of dance and physical exercise, but is also associated with Hinduism, which challenged the students' understanding of 'theater' even more deeply than their strength and flexibility.

After two hours of intense training and a quick drink break, the Making Theater class continued its conditioning, this time in Mohiniattam — the traditional female dance of Kerala — with Chechi, Gurukkal's wife, who insisted that Mohiniattam is easier than Kalaripayattu. Perhaps at a muscular level she is right, but combining grace, precise eye movement, 24 distinct symbolic hand movements, smooth expression, constantly bent legs, and a straight spine with fluid torso movements made Mohiniattam every inch as taxing.

Two hours later, dripping in sweat from head to foot and covered in dirt from the Kalari floor, sitting down to banana leaves laden with rice, spices, banana, papadums, and truly local cuisine made the work more than worth it. Although the lack of cutlery left the students struggling to sponge their banana leaves clean using only their right hands, barely a grain of rice hit the floor and every stomach was left full to the brim.

Despite learning about Kalaripayattu before their departure, nothing could have prepared the students for their first session in the ancient martial art under the tutelage of Gurukkal in his Kalari.

No sooner had they recovered than the class hurriedly changed and got on a bus headed for a Kadammanitta Padayani (an annual ritualistic festival) hours away. During the journey, the bus driver overtook elephants and competed with marching drummers for road space — a spectacle for the class, standard traffic for the locals. But what differed about that day's congestion was the fact that, late in the night, traffic was brought to a complete halt by the sight of a local deity on the shoulders of two mediums in trance making its way to a new temple. When the students eventually made it to their intended temple, the evening only got more magical with the performance of an ancient cleansing ritual dedicated to the goddess Kali, which featured dancing, headdresses, and fire. Sadly, the class had to leave before the ceremony was complete. It was to continue until 7am, just two hours before the students' next scheduled Kalaripayattu session.

The next day was an even more demanding repeat of the first, with increasingly difficult exercises and diminishing energy levels, until, restored by lunch, the class headed to Kollam Pooram, a festival that marked the end of India's New Year celebrations. Amongst a crowd of thousands, the students watched as two teams of elephants and their riders — one representing Ganesh, the other representing Devi — attempted to outdo each other with colored umbrellas, choreography, and drumming.

As the sun set and the moon rose in the pink afternoon sky, the group arrived at the Kalari for a final demonstration of Kalaripayattu and Mohiniattam by the masters. Inside the Kalari, all thoughts of elephants and home were immediately forgotten as Chechi's dancing enchanted the audience. Later, Gurukkal's students sparred, kicking each other without restraint, flinging daggers through the Kalari, deviating from beautiful ordered fighting as if seeking new and inventive ways to injure one another. His students spent, Gurukkal, in a gesture of respect for Polendo, Theater Mitu, and the class, took it to the next level. He stepped into the ring himself and fought his student of 17 years, wielding a metal shield and the 'maximum' urumi sword. The two men moved so quickly that their swords disappeared into a rising cloud of dust that whirled around the powerful figures as energy radiated and sparks flew from their clashing swords.

After the sparring came to an abrupt halt (leaving the audience desperately wanting more) and Gurukkal explained the secrets of Kalaripayattu as only a guru can, the students reluctantly left the Kalari to pack for their flight home. Even after just a weekend, the students knew they would never forget the magic of India. 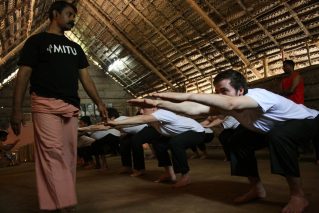 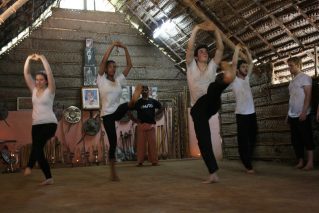 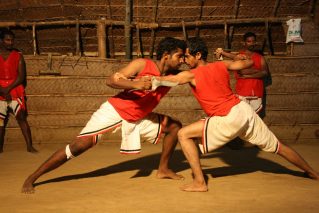 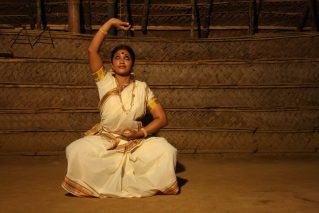 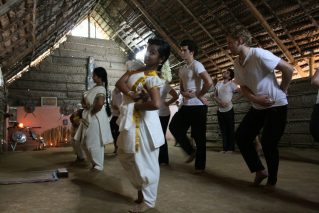 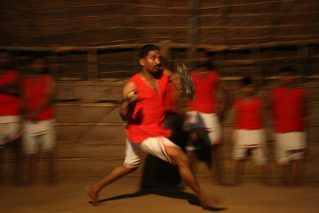