Experiencing Doha in just four days turned out to be a pleasant surprise for a group of 14 NYUAD students who visited Qatar for a University-organized trip during spring break. The 50-minute flight from Dubai to Doha was one of the shortest flights most participants had ever taken, and therefore no one expected the Qatari capital to be that much different from Abu Dhabi. The contrasts, however, were to be found in architecture, historical sites, recreational activities, and even city life. Lan Duong, NYUAD Class of 2014, described Doha as "a bit disorganized because it has just started to become a modern city, but in general, it felt like a very livable city and seemed quite family friendly — I saw a number of large, newly built playgrounds and long Сorniche walkways."

The trip's many activities were mainly oriented on the culture, arts, and history of Qatar and the Persian Gulf region. The group visited the brand new Arab Museum of Modern Art and saw its exhibition of Arab artwork produced over the last century. And as an immersion into Qatari history, the students traveled to the north of the country to visit the Zubara Fort and the first settlement in Qatar, which gave everyone a unique, untouchable experience as an escape from the tourist-friendly paths.

But the highlight of the whole trip was the Museum of Islamic Art, which opened to the public on December 1, 2008, and was designed by Ieoh Ming Pei, the famous creator of the Louvre Pyramid and the John F. Kennedy Library. The museum has a tremendous collection of Islamic artifacts from all over the world. NYUAD Visiting Professor Yasser Tabbaa, a specialist in medieval Islamic architecture, guided the group through hundreds of ancient pieces of Islamic sculpture, weapons, costumes, household utensils, and many other objects.

For three students enrolled in NYUAD's Elementary Arabic course, the Doha trip also included an Arabic-focused program. While they traveled in tandem with the rest of the group, they were able to improve their language skills and experience the Qatari dialect. Daniel Gellai, NYUAD Class of 2014 noted, "Even dialect changed with the 50-minute flight. Unlike those on the non-Arabic-focused trip, I learned Arabic terms and expressions for what we saw, ate, felt, and experienced. Kan jamil jiddan!"

On the fourth and last day of the trip, the group took to the water for sailing lessons, where students operated sailboats from 10- to 30-feet long in the crystal waters of Qatar and enjoyed a relaxing end to a journey jam-packed with new experiences. 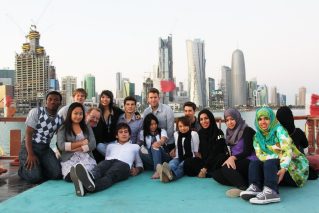 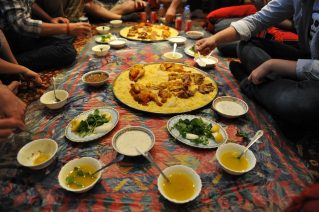 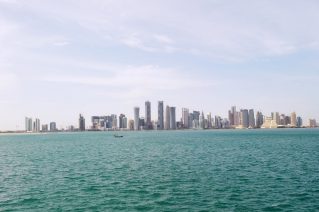 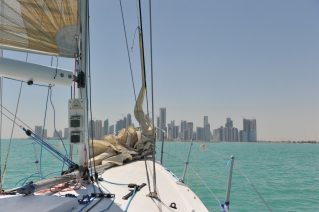