Of all the things NYU Abu Dhabi students can achieve, they’ll likely never be able to leap over tall buildings in a single bound or run faster than a speeding bullet. But for one week this April, every student on campus had the chance to live the life of a superhero.

At the start of Superhero Week, which began on April 2, NYUAD students interested in creative writing, storytelling, and drawing joined forces to host "Create Your Own Superhero." Using a prompt designed by seniors Attilio Rigotti and Cassandra Flores, students selected traits and roles from prepared suggestions to begin building their characters. From this foundation, students drew by hand or used web-based Hero Machine to bring their characters to life while also developing the character's backstory.

The results of this exercise were certainly unique. Senior Ty Karaba created "Retractable Beard Man" — a secret agent, who, after being bitten by a radioactive tiger, gains the ability to control the length of his hair. Freshman Sebastian Rojas Cabal created a shape-shifter who transforms into a beast-like superhero.

The following night, some 140 students packed a sold-out theater to watch a special screening of Captain America: The Winter Soldier, with many of them declaring it the best film yet from the Marvel Studios series. In the run up to the screening, the NYUAD Film Collective challenged students to produce their own superhero films. 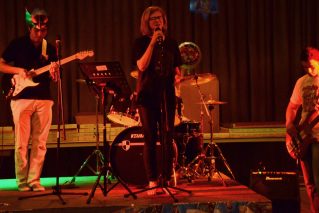 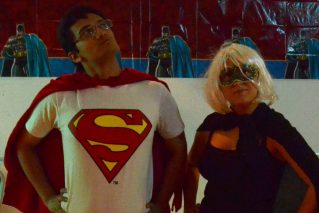 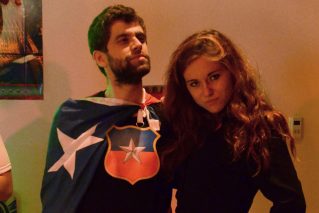 The following evening, students took part in a superhero costume party, during which they ate superhero-sized 28-inch pizzas, enjoyed a superhero-inspired musical medley by NYUAD's Music Society, competed for the best costume award, and watched two original short films created by their classmates.

Seniors Mohammed Omer and Nacif Taousse collaborated with freshmen Ahmad Yacout and Quan Voung to create Free Refill. In the four-minute action film, Omer and Yacout's characters are drawn into a secret government agency after the discovery of their special powers (super strength and infinite replication). Once trained by the master Quanfucious, the two live a life of celebrity until being tragically betrayed, leading them to avenge their fallen teacher.

The second film was titled Vic Puncher and starred yours truly alongside seniors Yannick Trapman-O’Brien, Joshua Shirley, and Zachary Ross. In this story, a mild-mannered university employee is suddenly called on to don a mask and cape. He battles with three nefarious henchmen before rushing home, removing his costume, and hugging his beautiful baby girl.

In the final event of the week, NYUAD's comic book and video game clubs took 15 students to Dubai to attend the Middle East Film and Comic Convention. Surrounded by thousands of other die-hard comic book, film, video game, and anime fans, the students mingled with industry professionals, met celebrities, and got to test out new games before their official release dates.

Each event during Superhero Week was a rousing success and I’m exceptionally grateful to those who helped make it a reality. Personally, this was a way to share my own love of comic books and superheroes with the NYUAD community while creating an engaging way for different student groups to collaborate.

Comic books tell deep (and sometimes dark) stories about the world in which we live and those who seek to see it saved or destroyed. Superheroes may wield powers that we will never possess, but their hearts and humanity remain equal to ours.