Diwali celebrations again lit up NYU Abu Dhabi's Downtown Campus. After the pooja prayer was read, the community came together for a festive night of ritual, scrumptious food, and music. The highlight, however, was arguably the smorgasbord of dances that were performed. Students choreographed and performed a Bollywood routine with all the passion that Bollywood demands, dancers from the Indian Embassy also performed dances from various regions in India, and finally, the night ended with furious freestyle dancing, amazingly uninhibited by curry-filled stomachs.

The annual Diwali celebration, commonly known as the "festival of lights," was organized by NYUAD's Cultural Ambassadors in association with the TASHAN (the Association for South Asian Cultural Understanding) student group. A number of students also helped by putting together music and dance pieces. The setting was picturesque with strings of lights draped over the courtyard, illuminating a colorful array of saris and kurtas donned by students of all different backgrounds. In between dances, students waited patiently for henna, sipped lassi, or reclined on mats and listened to the music.

Sophomore Anirudh Sood said he was delighted with the event. "It honestly surpassed all our expectations." For him, the festival not only marks religious celebration, but also a coming together of community to build stronger relationships and "of course there is the fun element," he said. The event drew a large crowd of NYUAD students, faculty, and staff. The 10th of December, a student band, performed a fusion of Indian and Western songs, which singer Benjamin Jance, NYUAD Class of 2015, remarked was "consistent with the cosmopolitan spirit" of the University. This phrase is often thrown around in abstract terms; however, the inclusionary spirit of the night, the enthusiasm of students to share the richness and diversity of their traditions with others, and the openness with which it was received are demonstrative of what cosmopolitanism means, in a more grounded sense, to the NYU Abu Dhabi community. 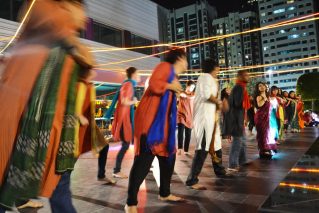 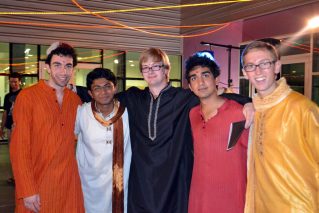 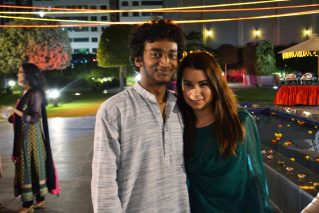