Curated by Sam Bardaouil and Till Fellrath, the exhibition will be on show from September 3 - November 17, 2018

Ways of Seeing is curated by Sam Bardaouil and Till Fellrath, Founders of the multi-disciplinary curatorial platform Art Reoriented, Chairmen of the Montblanc Cultural Foundation, and Affiliate Curators at the Martin-Gropius-Bau in Berlin.  The exhibition brings together 26 artists through 41 works spanning a variety of media from painting, sculpture and photography to sound, film and installation. It first opened at ARTER – Space for Art in Istanbul and was later adapted for the Boghossian Foundation – Villa Empain in Brussels.  The third iteration of Ways of Seeing premieres in Abu Dhabi and has again been adapted to include new works, by artists such as Andreas Gursky, Mona Hatoum, Lateefa bint Maktoum, Michelangelo Pistoletto, Hassan Sharif, Cindy Sherman, and Thomas Struth, among others.

For its third iteration at NYU Abu Dhabi Art Gallery, the exhibition features a substantial number of new artists and artworks, while keeping core works from its previous presentations. Benefiting from the Art Gallery’s setting within a university context, the exhibition themes will be further investigated through talks, workshops and screenings that draw on NYU Abu Dhabi’s diverse academic disciplines. 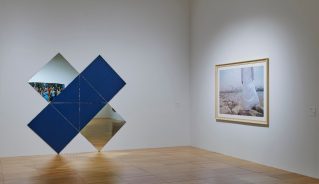 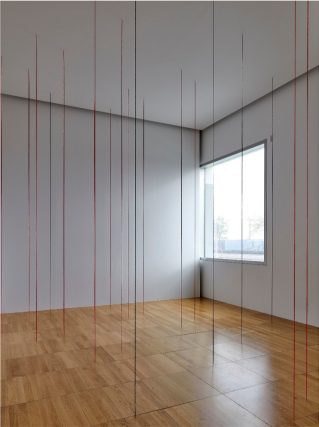 Taking its cue from John Berger’s 1972 ground-breaking BBC television series and his respective critical book on visual culture, Ways of Seeing invites the viewer to investigate the manifold ways by which artists accord forms and concepts that are otherwise familiar with renewed appearances and meanings. “The relation between what we see and what we know is never settled,” Berger wrote. Five decades later, his words remain as relevant as ever. In revisiting Berger’s seminal treatise, the exhibition raises not only the possibility for diverse viewpoints to coexist, but also the necessity to safeguard art’s ability to confront us with various points of view. Berger’s thesis acquires increased agency within the context of the UAE, and its heterogeneous society that is grappling with questions of modernization and tradition against a backdrop of accelerated cosmopolitanism.

The exhibition includes a number of seminal works that relate to Berger’s multilayered argument.  By inviting the viewer to take a second look, upon which the contours of a new reality begin to emerge, they reflect Berger’s call for the viewer to be actively engaged in the act of seeing. A 1968 projection piece by James Turrell, a 1992 vertical construction installation by Fred Sandback, along with a 1966 mirror installation by Michelangelo Pistoletto, all blur the boundaries between the artwork and the space in which it is displayed. Video pioneers Paul and Marlene Kos's 1976 Lightning video, two of Gustav Metzger's 1996 Historic Photographs, and two photographic prints by Lateefa bint Maktoum from 2011 and 2014 respectively, play on the tension between presence and absence, providing the viewer with new ways of accessing the artwork and its corresponding subject matter. Works by Salvador Dali, Alicja Kwade, Hassan Sharif, and Andreas Gursky change our perception of familiar objects by altering their function, display context, or physical appearance, making us ponder the way in which narratives are constructed through what we see.

“Artists use form and technique to express something about themselves and the world. Each of the artworks on display beckons us to take a second look, upon which the contours of a new reality begin to emerge.”

“We encourage viewers to be active rather than passive in the way they look at the works in this exhibition. There is no one ‘correct’ way to look at art, and our wish is that our audiences should both be aware of and embrace their individual reactions and points of view, as these are borne of unique personal experiences.”

“This exhibition covers incredibly diverse art forms, from conceptual to Orientalist art, contemporary and historical. In many ways, it is a microcosm of what we seek to do in our overall exhibition program: provide dramatically different perspectives on art, from one exhibition to the next. We are investigating, through art, the diversity of human experience. We invite everyone to visit the gallery and explore their very own unique way of seeing these artworks, and by extension, the world.”

The exhibition is accompanied by a fully illustrated, bilingual English/Arabic 181-page catalogue, published by NYU Abu Dhabi Art Gallery and Akkadia Press, and edited by Sam Bardaouil and Till Fellrath with contributions by Mary Acton, Maya Allison, Sam Bardaouil and Till Fellrath, and Stephanie Moser. The catalogue will be available for purchase at The Art Gallery and at the NYU Abu Dhabi bookstore.