When we say that NYU Abu Dhabi opens global opportunities for students, this is exactly what we mean. For the first time, students and their faculty mentor participated in the FILE Media Arts Festival in Sao Paulo, Brazil, well known as the biggest media arts, design, and technology festival in South America.

Felix Beck, NYUAD assistant professor of practice of design, worked with four students, whose majors range from civil engineering to theater and economics, on graphic animations that played on the outside of a pyramid-shaped building in the city center for nearly three months while the festival was happening.

"The students presented their worldview of openness, opportunity, and optimism toward the future," he said, "as gigantic animations manifested on a three-sided media-facade." The animations represented each individual student's interpretation of cultural exchange.

Beck said the collaboration will likely continue next year because the curator of the festival was so pleased with the results.

To work with the students on this project is truly a fascinating and inspiring experience. 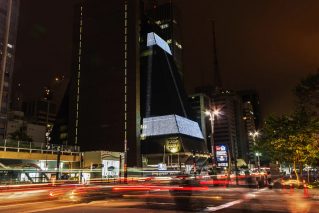 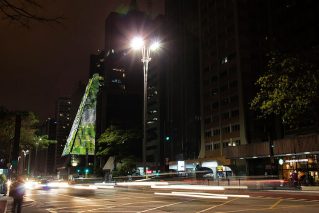 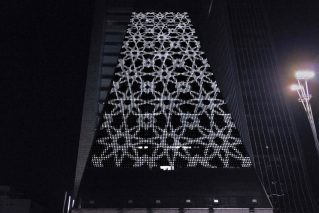 Droplet by Alia Alharmi
Through working with digital media and animated frameworks, Alia Alharmi urges the reconsideration of human conceptions of time and space. She hopes to convey the uncontrollable progression of time by showing a single droplet of water that continuously falls and rises – always reappearing into the water below, or above. The artist invites the audience to ponder the origins of this water cycle: When did it begin? How long will it run for? Will it ever end? Like grains of sand in an hourglass, the droplet represents the tangible, incremental passing of time.

Window by Nahil Ali Memon
At a visual level, the concept involves geometric patterns growing on the building. On its right face, patterns mimicking the mashrabiya style of windows in ancient Arabian and South Asian architecture are depicted. On its left face, they resemble Cobogó bricks used in Brazilian architecture. The patterns start from the bottom corners and slowly consume all the space available. Eventually, they meet each other and a conflict of space ensues. This conflict results in a new pattern that combines elements of both of the original patterns on the middle face. At a metaphorical level, the concept represents the clash of cultures during exploration and growth and the need for the self to learn to tolerate the other.

As the expression of the body through dance is an important element to Brazilian culture, this design centers on the importance of not losing the freedom to move one’s body. The building encloses the dancer who must be able to move within the confines of the structure, which serves to hold the dancer captive as well as open up the possibilities of how minute movements have a profound effect on the body. Previously filmed footage is mapped to the façade and shows the dancer from three different perspectives performing simple movements within a narrative. The objective of the design is to remind the passerby not to fall into the confines of the everyday work life and to reignite the body.

“Evolving Roots” refers to the production of coffee seeds in Brazil as a cultural reference. On one hand, it emphasizes the significance of coffee production in Brazil as the world’s largest producer of coffee for the last 150 years and Sao Paulo as the 3rd largest producer state in Brazil. On the other hand, it captures this natural form in a digital imagery. By creating such contrast, Basaran aims to reflect the dynamism between the nature and technology in today’s world. And raises the debate on how human stays connected to their environment, how nature itself is still conserved in the face of the speedy change towards mechanical interfaces and mediums.