This January, NYU Abu Dhabi students took courses in Abu Dhabi but also hit the road. Enrolled in just one course for three weeks, they immersed themselves in the subjects at hand, gaining real-world perspective in what they’d studied in the classroom.

My January Term started as soon as the bus pulled away from Sama Tower and headed toward Al Ain. As part of my three-week course Colloquial Arabic: Emirati Dialect, I had pledged to speak only Arabic, just like the rest of my classmates.

The bus ride was spent in near silence, as people drifted in and out of sleep, or with communication consisting mostly of eye contacts and gestures. The few and brief conversations we did have were initiated by our professors. But as days went by, the sense of nerves dissipated, and we began to feel more comfortable speaking our chosen second language.

I took the class as I enjoy learning and using the Arabic language, and saw this as an opportunity for me to focus solely on practicing the dialect. The J-Term course demanded a lot from us. The first homework assignment was due on the second day of class and took me over five hours to complete. Besides daily assignments, we completed seven audio journal entries, each three to five minutes in length. This was in addition to the skits we were required to prepare as well as presentations on different aspects of Emirati culture.

The largest assignment was preparation for a presentation at the culmination of class, a public event covered by the local media. The preparation involved dubbing a clip from the movie Aladdin into the Emirati dialect, memorizing and performing the song "Allah ya dar Zayed" by Maihad Hamed, and performing a live skit.

For our experience outside of the classroom, we had daily activities such as dinner in the desert, touring an oasis, visiting the summit of Jebel Hafeet, staying overnight at a host family's house, and wheelchair basketball. All the activities provided a different environment for practicing what we had learned in class, and for better understanding Al Ain and the Emirati culture. It was mentally taxing to speak in Arabic at all times in class and during the activities; it often took what felt like minutes before I spoke, stuttering verbal conjugations. But in retrospect, it didn't seem like work at all.

Two activities in particular were very memorable for me: wheelchair basketball and the overnight stay at a host family. Wheelchair basketball initially struck me as bizarre because it seemed to have no relations to the Emirati culture or Al Ain. Then, my general knowledge of the Emirates expanded when I learned that the Emirati Club for the Disabled is the first of its kind in Abu Dhabi. I had expected to feel uncomfortable playing basketball in a wheelchair and speaking in Arabic. Barely five minutes in, I learned that it was not the case. Differences don't really matter when both parties are willing to share and communicate with one another. Now I know who I can count on to play a pickup game of basketball whenever I go back to Al Ain.

I also had a wonderful time with my host family, Abu Yar, Um Abdullah, Mohammad, and Abdulrahman. It was my first time having the opportunity to witness the renowned Arab hospitality. Most of the time not spent in the majlis talking was spent on the zulia eating. Many of my conversations with my host family members were punctuated with the phrase mub faahim, which means, "I don't understand." This prompted continual re-wording of what was said until mub faahim became faahim. Soon, it became an inside joke between Mohammad and myself, for whenever I saw Mohammad after the homestay, he would end his sentences with a smirk and a "faahim?" Not wanting to be outdone, I would reply with "al hein, hei" — I do now.

I love how much I learned and how much fun I had doing so. Our uncomfortable bus ride at the beginning of the course was not at all indicative of what the class would become. It is wonderful to have started 2014 this way. 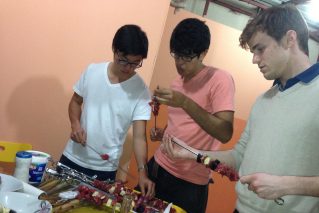 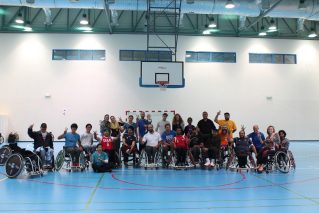 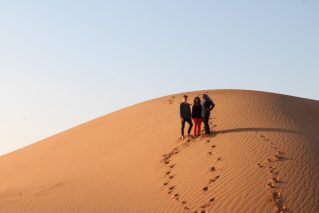