The announcement that former UK Prime Minister Gordon Brown was to spend time in Abu Dhabi was one that many in the NYUAD community had been anticipating since his appointment as NYU's inaugural Distinguished Global Leader in Residence. Nevertheless, a palpable excitement built in the days leading up to his February 24 arrival, brought on, no doubt, by the prospect of meeting the man who was responsible for leading the United Kingdom through its longest period of prosperity, as well as playing an instrumental role in its recovery from the global crisis.

Surrounded by his entourage, Brown swooped into the NYUAD Downtown Campus for "Tea and Biscuits," a question and answer session ably led by Edward Withers, one of the University's Resident Advisors. Brown was an affable speaker and, with a great deal of wit and humor, he entertained the audience while discussing the more serious issues of the financial crisis, the EU and its expansion, UK politics, and leadership techniques in detail, with fresh, direct, and complete answers. The event was followed by a tour of the Downtown Campus, the highlight of which was Brown himself stumbling across a slumbering student in the shade of the DTC garden.

Perhaps the high point of the visit was the "Pudding in the Palace" event, held in the Emirates Palace, which displayed in splendid fashion a fraction of the burgeoning talent available amongst NYUAD's inaugural class. I led the proceedings, and Manuel Nivea, Claudia Carrasco Valdich, and Alejandra Pinto Miguel — who combined to perform a version of Color Esperanza, the lead single from artist Diego Torres' fifth album — opened the event in a magnificent way. They were followed by Yannick Trapman-O'Brien, who showed off his oratorical and creative talent with a superb spoken word piece on the topic of friendship.

Nearing the conclusion of the evening, knowing that Brown was heavily influenced by the writings of Adam Smith, it was with delight that NYUAD Vice Chancellor Al Bloom, NYU President John Sexton, and NYUAD Associate Vice Chancellor of Admissions and Financial Aid Linda Mills presented Brown with a copy of Smith's The Theory of Moral Sentiments, printed using NYUAD's Espresso Book Machine, which allows for on-demand publishing.

With formalities complete, it was left to remarkable student Mate Bede-Fazekas to weave magic on the piano, bringing the musings of a Russian with an unpronounceable moniker to life. With rapturous applause ringing through the arena, Brown was whisked away for his next appointment, somewhere across the globe. 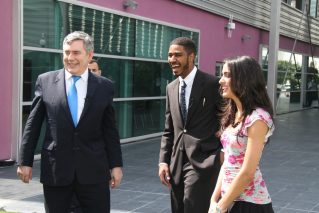 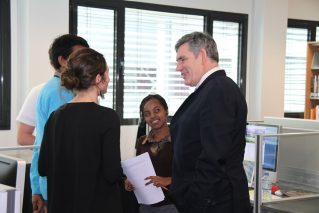 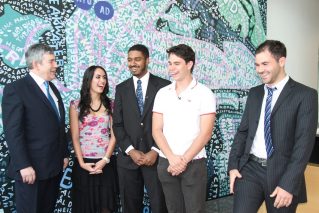 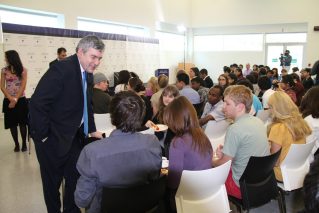 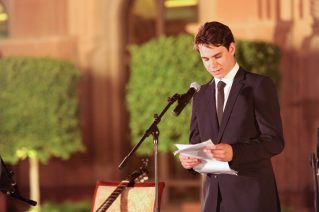 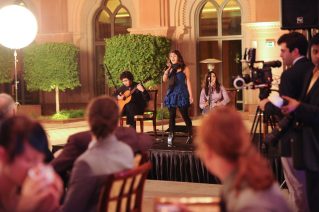 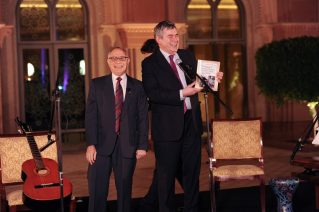