More than 50 NYU Abu Dhabi students participated in a team relay race in the scenic Hajar mountains in Oman on February 7. The 22nd annual Salomon Wadi Bih Run kicked off from a beach just over the border of Oman's Musandam exclave. The out-and-back route followed asphalt and packed gravel roads through a rocky canyon, ascending a total of 1,000 meters over 36 kilometers before returning. Teams of five completed the 72-kilometer distance by alternating runners at checkpoints located every few kilometers: as one runner started a leg, a support vehicle drove the rest of the team ahead to the next checkpoint.

For NYU Abu Dhabi first-year student Eliza Tait-Bailey, who ran with The Bih Team, one of 11 student teams from NYUAD, the team spirit was what she enjoyed most about the event. "Every time my team drove past, they would shout encouraging words," said Tait-Bailey. "It's not individual moments" that made the race special, she added, but the feeling of "yeah, we're a team, we can do this."

The Wadi Bih Run was inaugurated in 1993 with 16 teams, and was organized by Ras Al Khaimah resident and outdoors enthusiast John Gregory. The run has since expanded to include two solo events: Solo Full, covering the same 72-kilometer route as teams run, and Solo Canyon, an abbreviated 50-kilometer route. This year, 206 teams completed the relay, while the Solo Full and Solo Canyon events witnessed 41 and 65 finishers respectively. This is the third consecutive year that teams from NYUAD have participated in the relay event.

As if running for kilometers over undulating steadily ascending gravel is not strenuous enough, students had to deal with an added challenge this year: sleep deprivation. Around 11:30pm the night before, the two buses carrying NYUAD's student runners arrived at the border crossing to find a snaking line of vehicles waiting to enter Oman for the event. The NYUAD buses were some of the last vehicles to be waved across, hours later. They arrived at the beach in front of Dibba's Golden Tulip Hotel, where participants traditionally camped the night before at around 5am that morning, with just enough time to get ready before starting the race an hour later.

Students made the most of the delay, however, finding food at nearby restaurants, napping on the bus, or hanging out with friends. "It was a good moment to bond," said senior Peter Ndichu, who raced with Tough Cookies, the fastest NYUAD team and 10th place finisher overall. "As a senior who is graduating, and trapped on the border with other new students and other seniors, it's a great opportunity for us to be stuck together and catch up," Ndichu added.

Wayne Young, Associate Director of Athletics and NYUAD's running coach, also emphasized the social purpose of the run. "Wadi Bih is a unique event that allows students to bond with one another in a non-academic environment," he said. "They get to see each other outside their community in a difficult situation and are able to inspire each other to accomplish something they may have not thought possible. … It's building relationships through sport, student to student, student to staff and student to community members all in one day in a wadi in Oman."

A number of NYUAD staff also participated and ran on three teams: the Card Catajoggers, consisting of NYUAD library staff and a student; the Purple Ray Runners, a mixed team including students and post-doctoral fellows; and the Wadi G's, made up of Global Academic Fellows.

Eva Clarke, a fitness instructor at NYUAD, put in a strong showing in the 50-kilometer Solo Canyon event, winning the women's category by more than 45 minutes. "On the day of the event I knew I was going to finish, because I won't let any type of challenge defeat me," she said of her performance. "I figured I'd go out and see how I do, not run competitively. But when I came down the hill [after the race's midpoint] I realized just how well I was actually running so I put on a spurt."

Clarke ran neck-to-neck with the second-place male contender for the second half of the race, finishing just under two minutes ahead of him, and a mere 12 minutes behind the first-place runner, coming in second overall.

Clarke, who won the women's Solo Full event last year, did no specialized training for the race this time around. The reason? In the weeks and months leading up to this year's race she was focused on attempting to break two world records—the record for the most knuckle pushups in one hour (1206 pushups) and in 24 hours (9,241 pushups). A week before Wadi Bih she did both. Read about Clarke's record breaking feat on the Gulf News here.

Most NYUAD runners, of course, were there to "complete not compete," as Coach Young summed it up, and to enjoy the sense of community that only a 72-kilometer slog through a beautiful, rocky wadi can engender. 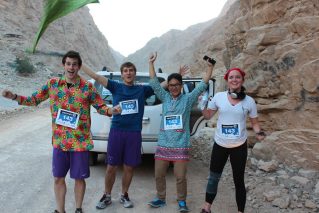 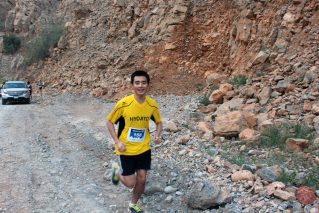 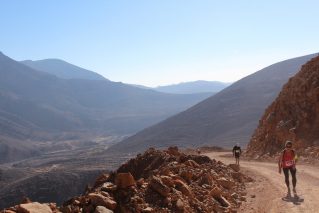 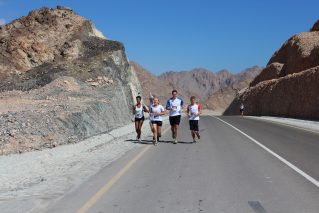 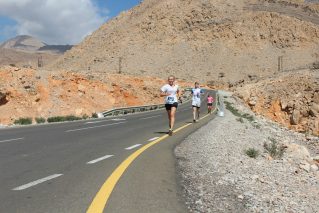 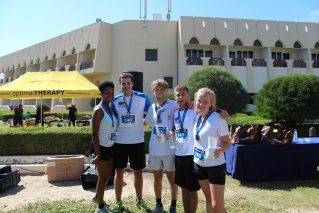